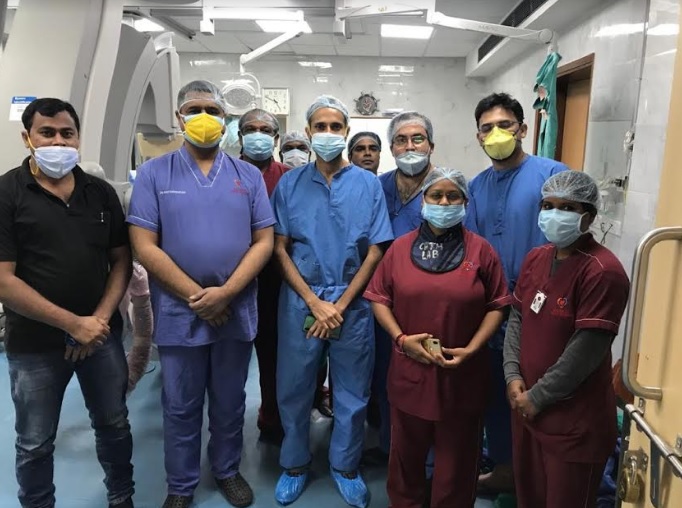 A female patient aged 42 presented with advanced heart disease and a critical blockage in the LAD (left anterior descending artery). Doctors had attempted to open up the blockage through routine angioplasty techniques and were unable to perform the angioplasty. Dr. Arun Kalyanasundaram was flown in from Chennai to help perform the case utilizing laser atherectomy.

Laser atherectomy is a technology that helps in dealing with certain kinds of blockages that cannot be removed using traditional method of balloon angioplasty/stents. It also plays a useful role in treatment of blockages that forms within stents and in chronic total Occlusions.

Speaking about the same, Dr. Arun Kalyanasundaram said, “I could not be more pleased at having proctored and performed Indias first laser procedure since its commercial launch now in India. Using this technology, we will now be able to treat more patients who deserve world class care. This advancement in technology in India will raise the standards for cardiac treatments and pave for better quality treatment for cardiac patients across the country.”

Dr. Arun Kalyanasundaram is an eminent Interventional Cardiologist, associated with many leading hospitals globally. He is the Chairman, Division of Cardiology, Promed Hospital, Chennai and a global proctor (internationally authorized to teach complex cardiac interventional procedures to other medical practitioners) for Chronic Total Occlusions (CTO). Dr. Arun Kalyanasundaram was the first proctor in United States for laser atherectomy and was involved in the seminal study where he proctored physicians in India (in 2017) and helped pave the way for its approval by DCGI.

He holds several firsts including having performed South Asia’s first Stingray balloon catheter for chronic total occlusions. He is also an Honorary Director at Fortis Escorts Hospital, New Delhi, and heads the Chronic Total Occlusion PCI program there. He is also the founding member and course director of CHIP-CTO conference.

Dr. Arun Kalyanasundaram is part of the research faculty at renowned universities in the US, UK, Middle-East, Asia and more. He did his MBBS at the prestigious Madras Medical College, Chennai and trained in interventional cardiology at the Cleveland Clinic (#1 in Cardiology by USNEWS since 1994). He brings with his expertise an assurance to every patient that “there’s always an option” in ridding the heart of blockages.