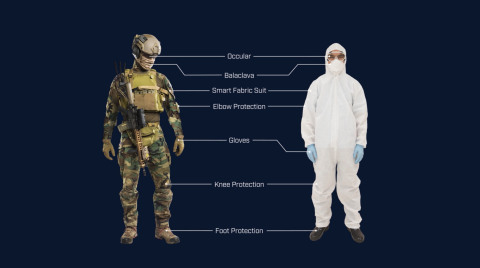 FLIR Systems, Inc. (NASDAQ: FLIR) announced it has won a contract with the Defense Advanced Research Projects Agency (DARPA) to rapidly develop novel fabrics with embedded catalysts and chemistries that can fight and reduce chemical and biological threats upon contact. The revolutionary fabrics will be incorporated into protective suits and other equipment such as boots, gloves, and eye protection that can be worn by troops on the battlefield, medical experts, healthcare workers, and more. FLIR received $11.2 million in initial funding for the potential five-year effort worth up to $20.5 million, including options.

The Personalized Protective Biosystems (PPB) program will create fabrics with built-in ability to fight chemical and biological agents, from VX to chlorine gas to Ebola virus. The revolutionary fabrics being developed by FLIR Systems will be incorporated into protective suits and other equipment such as boots, gloves, and eye protection that can be worn by troops on the battlefield, medical and healthcare workers, and more. (Photo: Business Wire)

The goal of DARPA’s Personalized Protective Biosystems (PPB) program is to reduce the substantial weight and physiological burden of current Personal Protective Equipment (PPE) so soldiers and other specialists can better perform their tasks. PPB will combine novel, lightweight protective materials with new prophylactic medical technologies that mitigate chemical and biological threats at vulnerable tissue barriers, notably the eyes, skin and lungs. The complete system will enable troops and first responders to operate without the burden of carrying and wearing PPE, which can cause heat stress and reduce time spent completing the mission.

“With lives at stake, future operators wearing PPB suits will gain a major edge in staying protected from toxic chemicals and emerging biological threats such as dangerous viruses,” said Mark Stock, VP and general manager of the Sensor Systems business at FLIR. “We’re honored DARPA has chosen us to lead this extraordinary and highly innovative effort to develop first-of-its-kind protective fabrics for our nation’s warfighters, health and public safety officials.”

FLIR and its teaming partners will develop a prototype fabric material, the Integrated Soldier Protective System (ISPS), for testing by government laboratories. Work will be performed at FLIR facilities in Pittsburgh. The ISPS award consists of a two-year base period, two-year first option, and one-year final option. The result after five years will be a suite of prototype protective fabrics and garments ready for transition to a program of record with the U.S. Department of Defense.

Founded in 1978, FLIR Systems is a world-leading technology company focused on intelligent sensing solutions for defense and industrial applications. Our vision is to be “The World’s Sixth Sense,” creating and advancing technologies to help professionals make better, faster decisions that save lives and livelihoods. For more information, please visit www.flir.com and follow @flir.

The statements in this release by Mark Stock and the other statements in this release about the contract and order described above are forward-looking statements within the meaning of the Private Securities Litigation Reform Act of 1995. Such statements are based on current expectations, estimates, and projections about FLIR’s business based, in part, on assumptions made by management. These statements are not guarantees of future performance and involve risks and uncertainties that are difficult to predict. Therefore, actual outcomes and results may differ materially from what is expressed or forecasted in such forward-looking statements due to numerous factors, including the following: the ability to manufacture and deliver the systems referenced in this release, changes in pricing of FLIR’s products, changing demand for FLIR’s products, product mix, the impact of competitive products and pricing, constraints on supplies of critical components, excess or shortage of production capacity, the ability of FLIR to manufacture and ship products in a timely manner, FLIR’s continuing compliance with U.S. export control laws and regulations, and other risks discussed from time to time in FLIR’s Securities and Exchange Commission filings and reports. In addition, such statements could be affected by general industry and market conditions and growth rates, and general domestic and international economic conditions. Such forward-looking statements speak only as of the date on which they are made and FLIR does not undertake any obligation to update any forward-looking statement to reflect events or circumstances after the date of this release, or for changes made to this document by wire services or Internet service providers.

This is a syndicated feed. Trade News Network is not responsible for any claims made in this story.